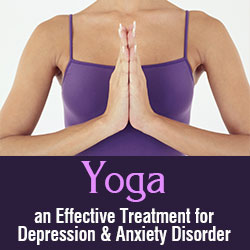 Aerobic exercise daily is a reliable and effective treatment for mild to moderate depression, and anxiety disorder. Research suggests that yoga may work even better than other exercise.

A study from Boston University School of Medicine and published by Journal of Alternative and Complementary Medicine showed that yoga increased levels of gamma-aminobutyric know as GABA in the brain. Low levels of GABA, a neurotransmitter correlates with depression and anxiety disorders. Investigators followed two randomized groups of healthy volunteers for 12 weeks. Group one performed one hour of yoga three times a week, while the group two walked for one hour three times a week. Before and after the last session, the researchers compared the GABA levels of each of the volunteers in both groups, using magnetic resonance spectroscopic imaging. The researchers found increased GABA levels and decreased anxiety among the participants in group one, the yoga group, who also reported a significantly greater reduction in anxiety and improved mood over the course of the study than did the volunteers in group two, the walking group 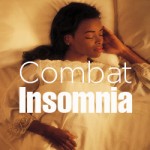 Even with all the modern technology that simplifies people’s lives, Americans agree that there are simply not enough hours during the day. Everybody, from the soccer mom to the high-powered business executive, sacrifices hours of sleep in order to complete the long to-do lists. Healthcare …

END_OF_DOCUMENT_TOKEN_TO_BE_REPLACED

Pregnant women experience morning sickness, hormonal changes and an ever-expanding abdomen to accommodate their developing child. Expectant fathers empathize with their wives, but often feel there is nothing they can do. Wrong! There are several ways a man can help the expectant mother through her …